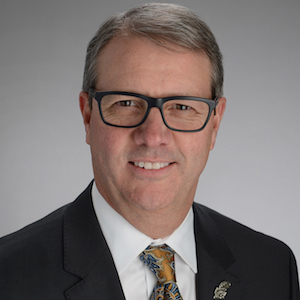 Douglas A. Girod began as the 18th chancellor of the University of Kansas in July 2017.

Before becoming chancellor, Dr. Girod served as executive vice chancellor at KU Medical Center, where he oversaw the educational, research, patient care and community engagement missions of the schools of Medicine, Nursing and Health Professions, with their total annual enrollment of more than 3,300 students; a workforce of more than 2,100 faculty and more than 4,000 staff; and research funding of nearly $100 million.

A head-and-neck surgeon, Girod first joined the KU Medical Center faculty in 1994 and quickly rose through the academic ranks, becoming chair of the Otolaryngology department in 2002. In that role, he was instrumental to the University of Kansas Health System being named in the U.S. News & World Report "Best Hospitals" national rankings.

Committed to caring for patients throughout the world, Girod has led or participated in a dozen international medical missions in places such as Uganda, Guatemala, Mali, the Philippines and Mexico.

Girod has also been active within the his community, serving on the Board of the Kansas City Kansas Chamber of Commerce and the Mayor's Healthy Community Initiative. He also serves on the Board of Trustees for MRI Global and the Kansas Medical Society. He is currently co-chairing the regional civic community effort known as KC Rising to develop long term economic prosperity for the Kansas City region. He was recognized with a Regional Leadership Award in 2016 for his work with KC Rising.

Girod has served as president of the American Head and Neck Society, and vice president of the Triological Society, in addition to other national leadership roles. Of his numerous awards and honors, he is perhaps most proud of his 2006 Student Voice Award for Teaching on a Surgical Rotation, bestowed by students at the University of Kansas School of Medicine.