Note: This interview in the Weekly Wisdom Series originally aired on December 7, 2020 as part of the University Innovation Alliance’s Innovating Together podcast, appearing live on Facebook, Twitter, and LinkedIn.

We at the University Innovation Alliance (UIA) are proud to present the Innovating Together Podcast, which we've created in partnership with Inside Higher Ed. I'm the UIA's Executive Director, and my guest for the 12/7/20 episode of Innovating Together's Weekly Wisdom series was Dr. Frank Dooley, a much-valued friend of the UIA and Chancellor of Purdue University Global. In this conversation, Chancellor Dooley shared his wisdom about the differences – in both administrative practices and student expectations – between traditional brick-and-mortar universities and universities that were designed specifically for remote learning. Given that his transition was quite recent, these differences are still fresh in his mind.

Different Universities for Different Student Needs
Chancellor Dooley's transition from senior vice provost at a traditional university to the leader of an online institution brings him a unique perspective on the state of higher ed during the COVID-19 pandemic. He outlined the differences between students at Purdue University in West Lafayette and Purdue University Global.

Chancellor Dooley differentiated the student population at Global even further. "Two thirds are women," he continued, "and most of them have been in the workplace for about a decade – they're coming back in their 30s. And I'll say I have three populations. About 45 percent of my students were doing really well in a job, and they're coming back to get that credential that allows them to progress. Another 45 percent are trying to pivot. I think they're worried about automation in their workplace. Some might be going from a bachelor's to master's or an associate to a bachelor's, so they want another level. And then about ten percent of my students are here because they promised somebody – it might be a spouse, a child, themselves – that they're going to go to school.

"But the biggest difference is the students who come to West Lafayette are just brilliant 18 year olds, and they're looking at a university that is like what you'd expect in the movies. They're full-time, STEM centric, they're going for it. And in my population at Global, it's just the opposite. These are seasoned people, they're not looking for a dream, they're looking to advance in their career. But both of them, at the end of the day, are looking for an education."

"I'm living in a very different world," he admitted, acknowledging the demands of an online university, "but in other ways, I don't know that it matters. For them, a town hall might be in a large lecture hall with four or five hundred people in the room. For me, meeting with those four or five hundred people virtually, the staff is monitoring the chat. We're taking questions in real time, we literally go through and answer every question that we get from faculty. So I think, as a leader, the beautiful thing is you're going to be invited into rooms to have conversations and share your vision and direction."

One of Chancellor Dooley's key strategies is active listening. "If you listen to questions that come to you, they reveal what's important to the people," he observed. "And then if you start to address what's important to people, I think people are going to take you seriously, regardless of if you're in a room with them, or if you're doing it virtually. I think I first heard of active listening from Tim Sands, who was the provost when I first came into the Provost Office. Tim and I shared other things, we had daughters who are in high school together. And I think when you know somebody in more than one dimension, you're able to have these conversations. Very few of us want to listen to a talking head, right? Most of us want to be engaged, and most of us understand that you show respect by listening." 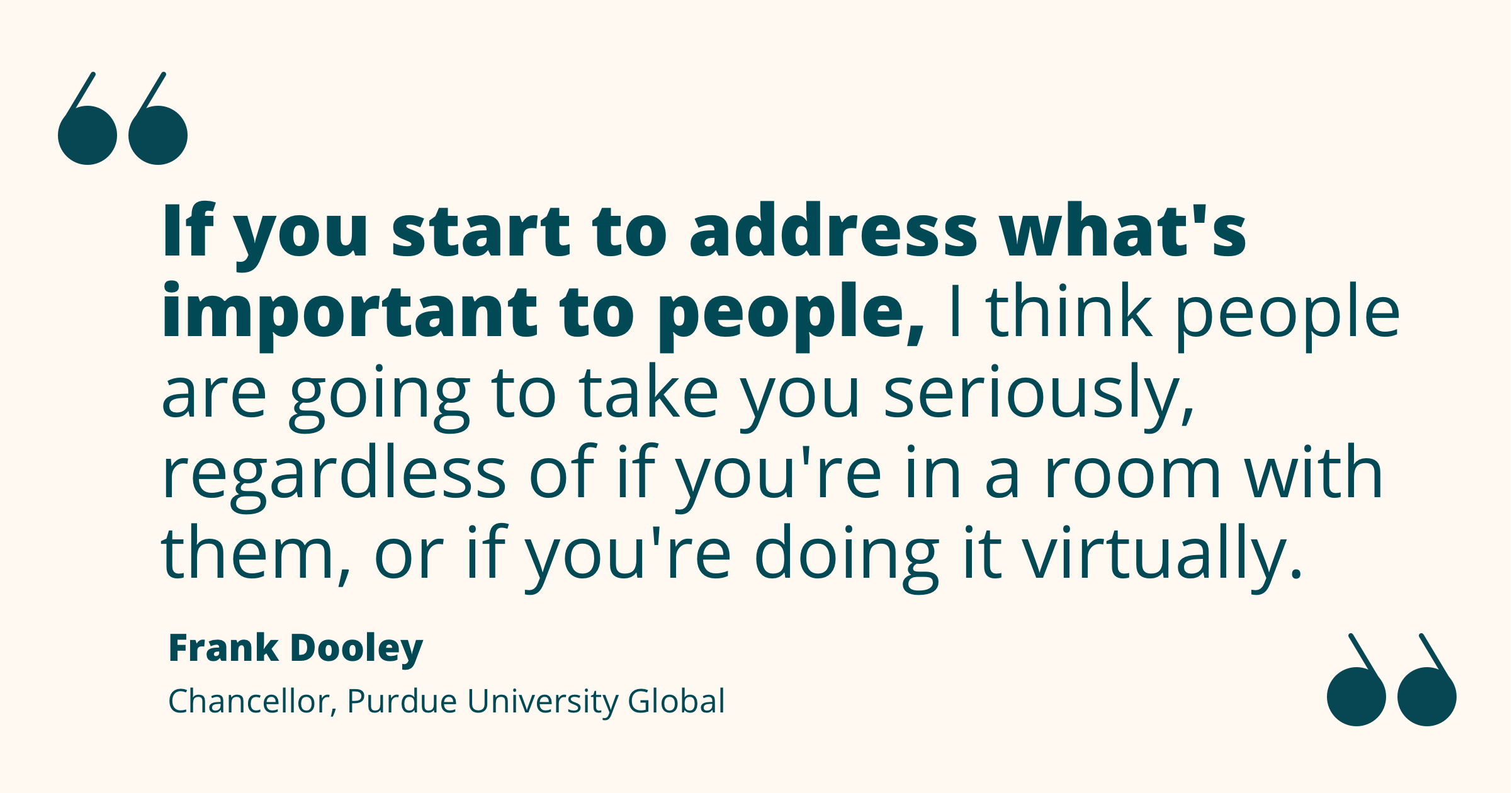 What Are You Trying to Accomplish in Your Classroom?
Through Purdue University's acquisition of Kaplan U when creating Purdue Global, the online institution was easily modeled on an established platform. Chancellor Dooley recognizes how this origin story differs from the many traditional institutions that have rapidly built remote learning platforms to engage their students during a pandemic school year, and he gladly shared his wisdom about some basic assumptions around remote learning.

The representatives from both schools discovered that, different as their students might be, the faculties were still trying to do the same things. Chancellor Dooley recalled, "A faculty member from West Lafayette said, 'I spend all of my time giving examples, because as smart as my students are, they don't know much.' Whereas the faculty from Global said, 'My students know a lot, but they only know about a small sliver. And what they don't understand is how stuff relates.' They found that in a lot of the fields, if you're going for an accounting degree or a nursing degree and you have licensure exams, you're trying to prepare for the same exam, but you're coming at it in two different ways. And it turns out that both are valid.

"We talked about pedagogy, yet there's an entirely different discipline, andragogy, that talks about educating adult learners. And my caution to most traditional universities is your centers for teaching learning know a lot about pedagogy, but they probably don't know very much about andragogy. And the adult learner is wired a little bit different than the 18- to 24-year-old."

Faculty Engagement
Chancellor Dooley reserved some of his highest praise for his faculty. "I found the excellence and how committed all the people who work for me at Purdue Global, how dedicated they are to student success, how willing they are to work hard to help students move forward, has all just been inspiring," he claimed. "It really has been a gift to work with these people. Just one example, there's an expectation that the faculty is going to check in on every student sometime during a week. And we haven't seen a large uptick in the mental health problems that we've been seeing in other parts of society. And probably most of the students would tell you that they think somebody there cares about their well-being."

And wouldn't any institution, online or traditional, want that degree of confidence in its faculty?

Bios of Guest and Host 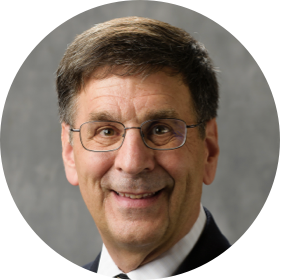 Guest: Frank Dooley, Chancellor, Purdue University Global
Dr. Frank Dooley, chancellor of Purdue University Global since May 2020, oversees academics for approximately 36,000 students, most of whom earn degrees online. He previously served as Senior Vice Provost for Teaching and Learning at Purdue University, providing leadership since 2014 for undergraduate education, and earning an international reputation as a gifted, innovative teacher and creative researcher. During his time with the Provost Office, he promoted and supported efforts to increase student success while maintaining Purdue’s reputation for academic rigor. Beginning in May 2017, he was a key leader in securing regulatory approvals and launching Purdue Global. Dr. Dooley has received numerous awards for teaching, research, and service, and was inducted into Purdue's Teaching Academy in 2002 and the University's Book of Great Teachers in 2014. His research interests include logistical and supply chain management for food and agribusiness. His publication record includes chapters in six books and more than 200 articles and other publications. Prior to joining Purdue's Department of Agricultural Economics in 1998, Dr. Dooley received his bachelor's degree from St. John's University, his Juris Doctor from University of North Dakota, and his doctoral degree from Washington State University. He and his wife Pamela have two daughters.

Host: Bridget Burns, Executive Director, University Innovation Alliance
Dr. Bridget Burns is the founding Executive Director of the University Innovation Alliance (UIA). For the past decade, she has advised university presidents, system chancellors, and state and federal policy leaders on strategies to expand access to higher education, address costs, and promote completion for students of all backgrounds. The UIA was developed during Bridget’s tenure as an American Council on Education (ACE) Fellowship at Arizona State University. She held multiple roles within the Oregon University System, including serving as Chief of Staff and Senior Policy Advisor, where she won the national award for innovation in higher education government relations. She was a National Associate for the National Center for Public Policy and Higher Education, and has served on several statewide governing boards including ones governing higher education institutions, financial aid policy, and policy areas impacting children and families.